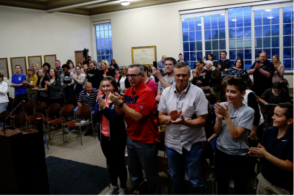 RIVERTON, Utah — The City Council passed a pro-life resolution Tuesday night, after some heated public comment but then a standing ovation by others in the room.

Some in the crowd said it was not the city’s business to wade into abortion talk. But others thanked the city council for taking a stand.

Read the rest of this article here >>